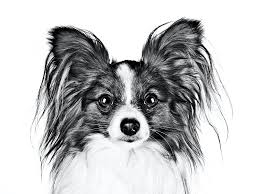 The origin of the Continental Toy Spaniel, of which the Papillon is the modern representative, can be traced through the paintings of the Old Masters of every country in Western Europe as far back as the earliest years of the 16th Century.
Beginning about 1500, Vecellio, called Titian, painted a number of tiny spaniels, rather similar to the hunting spaniels of the day. In that century and the next, dogs–so like the Titian spaniel that it is safe to assume this was a pure breed — made their appearance in Spain, France and the Low Countries.
We can only speculate on the ancestry of the Titian spaniel. Classical Greece and Rome possessed toy dogs but these were a spitz type which seems to have become extinct. During the Dark Ages only hunting and working dogs would have been of value, but with the dawn of the Renaissance, Italy became a prolific source of toy breeds of many varied types : toy greyhounds, dwarf barbets ( a sort of miniature poodle, often clipped lion-fashion ), dogs of Cayenne ( which were curiously pug-like), and a number of breeds which probably resulted from crosses of various sorts. The toy spaniel was quite different from any of these in its characteristics.

One authority has suggested that the toy spaniel was brought from China, with which country the Venetians had traded since the days of Marco Polo, the Chinese did, in fact, have, as late as the 18th Century, a parti-colored, long-coated dog not unlike the Titian spaniel, along with those resembling the modern Pekingese. But as the breeders of the Renaissance were able to reduce greyhounds and barbets to very small size, it seems unnecessary to resort to the Chinese theory to account for the toy spaniel.

The name spaniel means dog of Spain, for which reason it has often been inferred that the spaniel breeds originated there. The spaniel family, which includes the setters, is as old as such other basic canine patterns as the hounds, the mastiffs or the spitzes. It is therefore probable that the hunting spaniels came to Europe along with successive Asiatic tribes. In this case, spaniel was a misnomer for the hunting breeds as well as for the toy.

The often repeated story that the conquerors of Mexico brought the Chihuahua to Spain and that the Papillon is descended from it seems to have no historical basis. The Titian spaniel had been developed as a pure breed prior to the Conquest of Mexico. Furthermore, this theory seems to have been fabricated to account for the erect, oblique ears of the Papillon. But it explains nothing, because the Continental Toy Spaniel did not become the butterfly dog with erect ears until two and a half centuries after the Conquest.

The continued popularity of the little spaniel in court circles gave the breeders a ready market for their dogs. Evidently they conducted an intensive breeding program for its refinement. Over the years it developed finer bone, more abundant coat and profuse feathering. The most characteristic change, however, was in the shape of the head. Titian’s spaniels had relatively flat heads with little stop; a type of toy spaniel painted shortly after by Veronese and others had high-domed, sometimes bulging heads. By the time of Louis XIV, French and Belgian breeders had perfected the type they sought. Mignard, the official court painter, in his portraits of the child Marie de Bourbon, the Dauphin and His Family, and several paintings of Henriette d’Orleans, shows us a little spaniel that could scarcely be improved upon today. ( See paintings in the Photo Gallery : “Our Butterflies Journey with the Old Masters” )

From Titian through Mignard and his contemporaries, all of the Continental Toy Spaniels had drooping ears. The ears were set high, although far enough apart to show the curve of the skull. They were of medium size, hanging, as one writer has expressed it, “lightly”. There may, however, have been an occasional dog with leathers of sufficient strength for the ears to stand erect. Two 18th Century paintings suggest this.
Suddenly, toward the end of the 19th Century, the erect ear carriage with its butterfly appearance became highly fashionable. In fact, it so caught the public fancy that the new term of “Papillon” quickly became the name for the entire breed. Several attempts have been made in the past to straighten out the names of the two varieties, without much success. Recently the international Papillon organization, to which the American but not the English club is affiliated, has given to the drop eared variety the name of “Phalene”.

The Titian dogs were red and white. Before long, specimens appeared in all shades from pale lemon to deepest chestnut, while some of the most beautiful examples were black and white or silver-grey and white. All these colors were usually marked with a white blaze and often with the thumb mark on the top of the head. Then, toward the end of the l9th Century through the first two decades of this one, the vogue was for solid colors or for dogs with only the feet and chest splashed with white. Today the solid colors have disappeared and the preference is again for an evenly marked parti-color. People often insist on a one-word answer to the question, “Where does the breed come from?” Baron Albert Houtart of Belgium, author of the most authoritative work on this subject, demonstrated that credit for perfecting the Continental Toy Spaniel belongs equally to France and to Belgium. This statement is also true for the development of the erect-eared type. Both countries may rightfully consider the Papillon a native breed.

The little Papillon has survived rather better than the Royal Families in whose courts he was once such a favorite. Men, women and children of all ages and in all walks of life take him into their laps and hearts. Now, as truly as in the past, when he has found his way into a home, he is there to stay, as loving as he is beloved.